Right now, my husband is untouchable.  I mean, the guy can do no wrong around here.  A few weekends ago, he found me despairing over a stockpile of cardboard boxes I'd accumulated for the last several weeks.  We're having a Minecraft party for our boys, and I had my heart set on making a life-size Enderman with glowing eyes.  (If you've never heard of Minecraft, my guess is you don't interact much with boys under the age of 10, especially the geeky variety that live in my house.)

Unfortunately, I often come up with ideas that I can't engineer into reality.  That's why I'm so glad I married Macgyver. 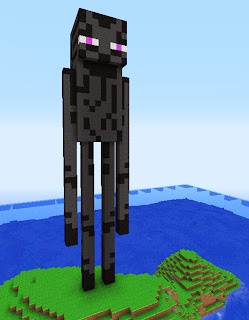 "I need your skills," I lamented to him, late on a Sunday evening.  I handed him a picture of the towering humanoid mob with gangly arms and legs known as an Enderman (on the left), and then pointed to the mess of boxes and duct tape I'd gathered as building materials.  Slowly, I laid out my idea of fashioning the beast out of cardboard, battery operated tealights and crepe paper streamers.  The plan sounded even more ridiculous when I heard myself explain it out loud. 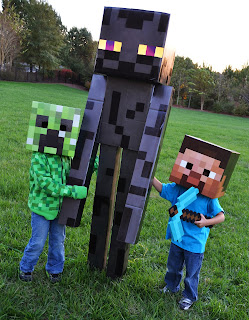 Twenty four hours later, he finished constructing a six-foot Enderman out of cardboard, with a lamp kit rigged inside.  My boys went bonkers when they saw it. I mean, it was like Christmas in October.  Here's the finished product in our backyard, with two of the boys wearing their Halloween costumes.

Like all of his projects, there were no building plans or instructions of any kind... the man is a genius but he never writes anything down.  So this is my sketchy version: He started with the head and body, which are two boxes attached with duct tape.  For the arms and legs, he cut flat boards into the right lengths, and then scored them with a utility knife to create straight folds.  Because the Enderman is so top heavy, he added weights on the bottom of each leg to anchor it.  After securing all the pieces with duct tape, he sprayed black metallic paint over the entire creature.  After two coats, he sprayed glossy black paint (with stencils he created from leftover cardboard) to create the pixelated details.  For the eyes, he used clear magenta-colored cellophane paper.  Don't ask me how he rigged the light bulb inside the head, but it works and it looks really cool at night! 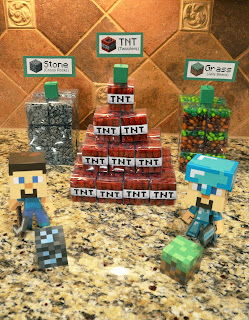 Minecraft is all about building blocks, which translates well into party favors!  I bought clear wedding favor boxes, and filled them with brown and green jelly beans (grass and dirt) and silver candy coated chocolate nuggets (stone).  The TNT boxes were filled with Twizzlers cut into small strips.  I wish I could take credit for these favors, but I got the idea from Pinterest. So many amazing, crafty moms out there! 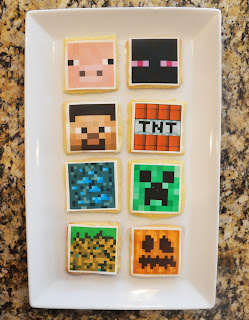 These frosted sugar cookies were a lot simpler to make than they appear.  I created the graphics on Photoshop, and sent them to a bakery to print onto 8" x 10" icing sheets.  These sheets are gluten-free, dairy-free and completely edible.  I cut each paper-thin sheet into 2" x 2" squares, and then laid each image on top of a sugar cookie, with a thin layer of cake frosting underneath. Scroll down to the bottom for the printable cookie sheets. 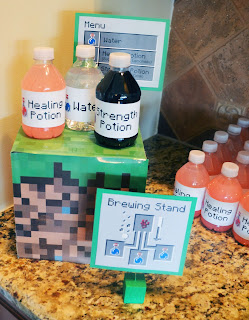 In the Minecraft world, players can create their own potions by adding ingredients (such as Nether Wart, Glowstone Dust, and Fermented Spider Eye) to water bottles at "brewing stands".  So I decided it would be fun to create a beverage station inspired by Minecraft, with a menu card borrowed from the game interface.  Making the potions required no alchemy on my part: Just mix water and Kool-Aid powder. 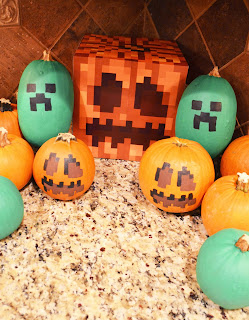 Finally, because it's Halloween, I found a template for the boxy pumpkin from the game.  Funny thing is that in Minecraft, the pumpkins spawn with jack o'lantern faces already carved into them.  To create our cardboard pumpkin, I produced the graphic (enlarged to measure 10" x 10") from our color printer and applied all five sides to a cardboard box.  Finally, I painted a few real pumpkins to match, and then turned two squashes into creepers.


Well, we're all waiting for fifteen boys, aged 9 and under, to arrive at our house.  And when the party is all over, at least we have an Enderman to remember it by.  I'm thinking we could use it as a night light or maybe it can stand guard in the foyer to ward off unwanted solicitors.  As my oldest son remarked: "It's a little creepy.  But in a good way."

Here are the printable cookie sheets for your party! 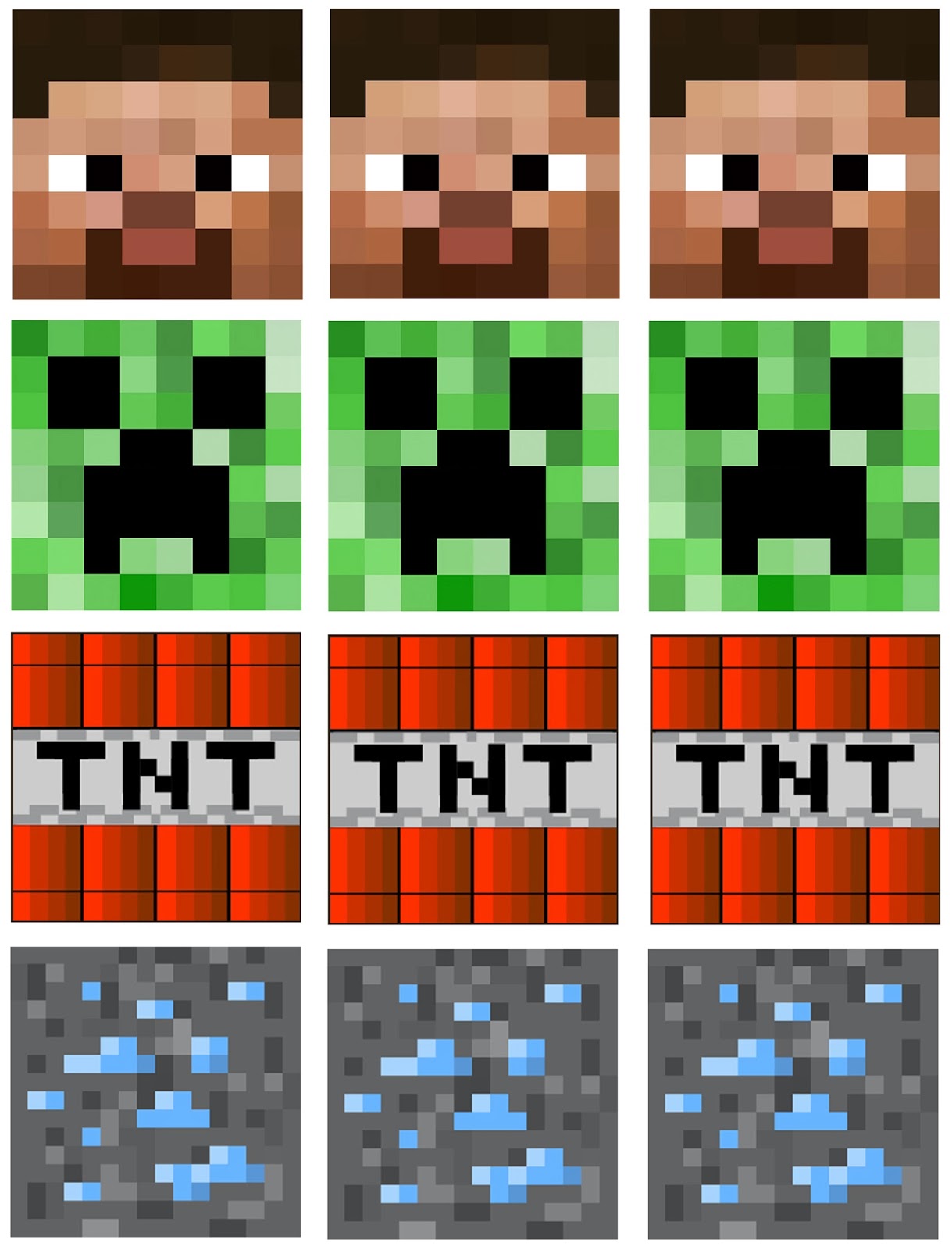 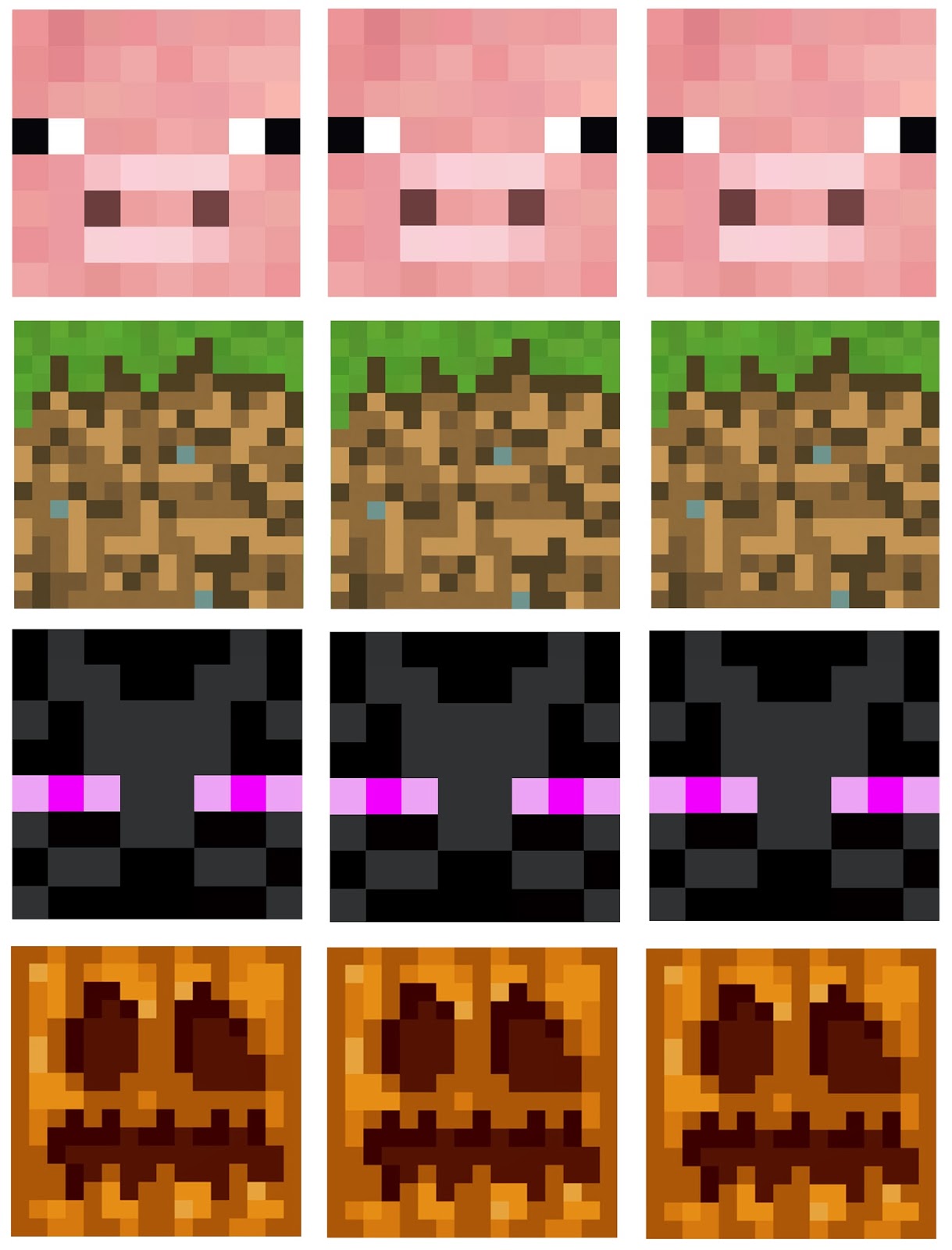 Posted by LifeAmongPirates.com at 8:24 PM
Email ThisBlogThis!Share to TwitterShare to FacebookShare to Pinterest 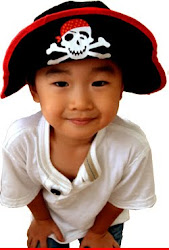 LifeAmongPirates.com
When I left a male dominated law firm to become a stay at home mom, I had no idea I was merely exiting one boys' club to join another. This blog documents my life with five boys (husband included) and their piles of Legos, Star Wars action figures, and Nerf guns.